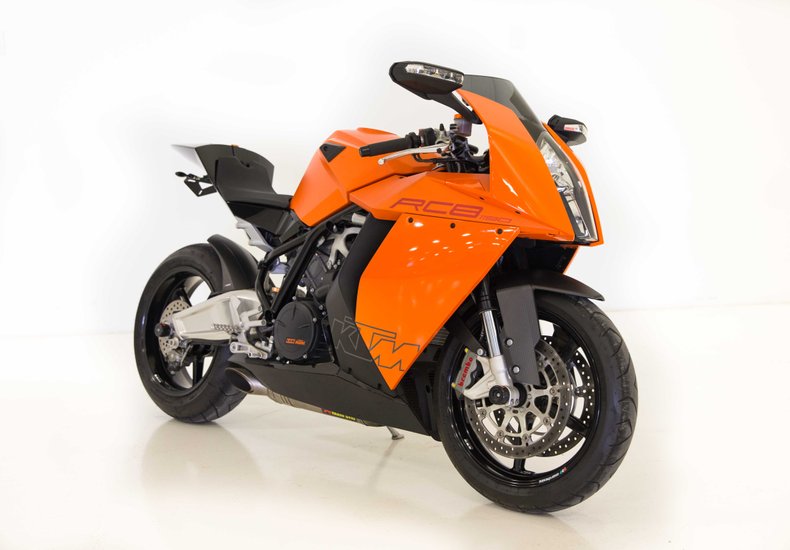 When KTM, an Austrian motorcycle manufacturer known for its popular line of Ready-to-Race off-road dirt bikes, decided to enter the pinnacle of sport bike motorcycle design they didn't know they would reshaped the standard as to what performance and style is all about. Thankfully in 2008.5, despite waiting five long years since the concept model was first revealed, their first super bike was finally ready!

KTM's RC8 Super-bike represents KTM's first mass-produced production super bike. This particular KTM is #5 of only 50 produced in their first year; it also only has 1052 miles!! The KTM RC8 was fully designed with the racetrack in mind and is intended to compete directly against Ducati's 1098/1198 Superbikes as well as the Big Four Japanese liter class motorcycles.

This1148cc twin cylinder superbike has retained its original razor sharp styling. The RC8's signature orange-colored body panels and it's unique bold design suggests an element of outrageous aggression. It's striking lines and sharp creases visually sets the KTM RC8 apart from all other manufacture's open-class Superbike offerings. Beneath is a liquid-cooled 1148cc V-Twin engine, manufactured by Austrian engine manufacturer, Rotax. The cylinders are canted at a 65-degree angle in effort to keep the RC8 engine as compact as possible. The KTM RC8 makes use of high-end suspension and braking components from technical suppliers WP and Brembo. There's the wonderful gnarling rumble from the hidden underslung exhaust, the faultless handling, superior braking, stunning styling and quality finish. The RC8 will probably prove to be more useable, more rider-friendly and far more comfortable than the Italian or American alternatives. The KTM RC8's styling is enough to entice any customer to the showroom; on looks alone.