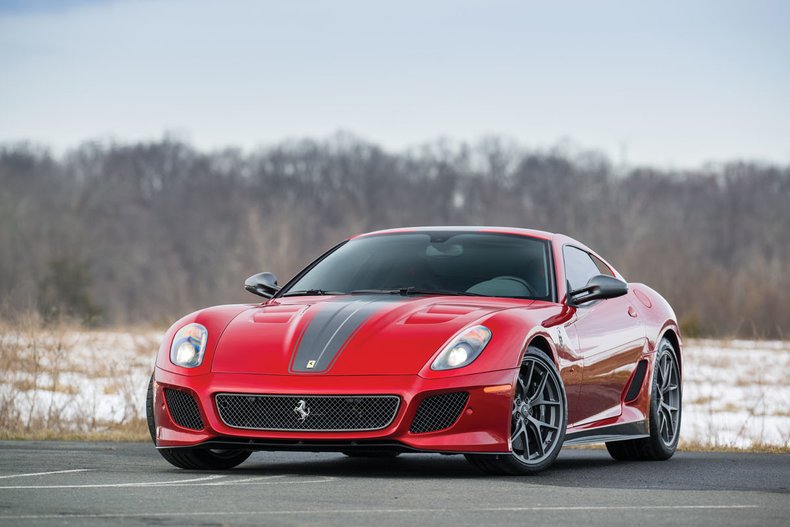 This particular 2011 599 GTO boasts a stunning array of options, helping it to stand out from the crowd. Keen observers will quickly note that its exterior color is not your standard Ferrari red but is rather Rosso Fuoco, a special order, triple-layer paint scheme. The color is further accented by a Grigio Silverstone stripe, and inside the car sports a seldom -seen full Charcoal Alcantara interior. Incredibly well optioned, the car is fitted with front and rear parking sensors, the Bose Hifi audio system, an Alcantara-trimmed steering wheel, carbon-fiber wheels cups, a carbon -fiber front splitter, a telemetry kit, and numerous other options.

Currently with its third, U.S.-based owner, the car has been well preserved and maintained in his ownership, currently showing just under 7946kms (4,938 miles ) from new. As such, it presents in as-new condition throughout. Furthermore, the car is accompanied by Ferrari Classiche certification and a clean CARFAX report.

Appropriately, only 599 examples of the 599 GTO were produced, and it is said that all examples were spoken for before the car had been formally announced. Today, the 599 GTO is no less desirable than it was back in 2011, and it as quickly become recognized as a modern-day collectable. Within the marque's history, the 599 GTO can be considered the first limited-production performance-oriented grand tourer produced since the 275 GTB/C, connecting it to a celebrated part of Ferrari's history.