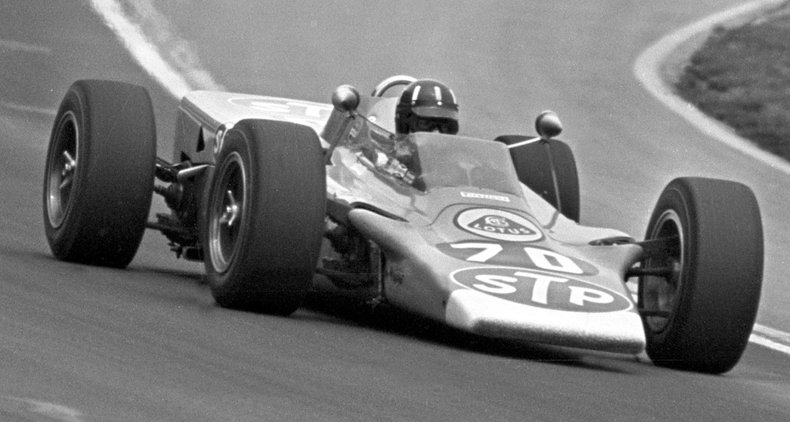 The story of chassis number 56-3 begins with Andy Granatelli, the former racer turned businessman who began annually entering teams at the Brickyard since 1946. Eventually becoming chairman of STP Oil Treatment, Granatelli ran Novi-powered cars that struggled to make an impact, but he noted in 1962 how a Dan Gurney-driven Boeing Turbocar showed great reliability through practice even though it failed to qualify. Through the mid-1960s, Granatelli incorporated four-wheel drive into his chassis to absorb the outrageous torque (and resulting wheel spin) of the 700-horsepower engines. He soon realized that the same principal would apply to turbine engines, which put out almost 900 pound-feet of torque from a dead stop.

Sourcing a Pratt & Whitney ST-6 turbine engine, Granatelli and his brothers built a cigar-shaped racer under the banner of their Paxton Products Company, with sponsorship provided by STP. The car was entered at the 1967 Indy 500, and Parnelli Jones caused quite a stir! Nevertheless encouraged by Jones' performance in 1967, Granatelli collaborated with Team Lotus for a 1968 turbine car, investing significant resources and the backing of his STP Oil Treatment sponsorship. Once again, Granatelli sourced PT-6 engines, which were de-tuned to develop about 500 horsepower. The overall design of the 1967 car was nicknamed “Silent Sam” for the turbine's quiet performance.

Lotus designer Maurice Phillippe undertook careful testing in a wind tunnel to develop new bodywork that would effectively limit the front-end lift exacerbated by Indy's high-speed oval track, which had compromised prior Lotus entries at Indianapolis. The design that he proposed was a study in aerodynamic simplicity, and it became an inspiration for a wave of wedge-shaped open-wheel racecars that followed, including the majority of Formula 1 designs.

Parnelli Jones declined to reprise his run in Silent Sam, but the withdrawal allowed him to focus on tuning Leonard's car, with fantastic results. During four laps of qualifying, Hill set a new speed record in 56-3, with an average speed of 171.208 mph (only to be outdone by Leonard's average of 171.559 mph). The two Lotuses became the first-ever turbine cars to earn polepositionstarts at the Indianapolis 500.

After the retirement from the 1968 Indianapolis 500, chassis number 56-3 was never raced again. It was then displayed at the STP headquarters for several years before being given to NASCAR legend Richard Petty. After 15 years in the famed racer's personal collection, the Lotus was sold to the new owner, who commissioned a ground-up restoration supervised by Clive Chapman of Classic Team Lotus (the son of Lotus founder Colin Chapman), and Vince Granatelli, the son of Andy Granatelli.

In 2014, having been mechanically rejuvenated and cosmetically freshened to its 1968 racing livery, chassis 56-3 appeared at the Indianapolis Motor Speedway in a reunion with the two other Lotus turbine cars from the 1968 Indy 500. Parnelli Jones, himself, took the wheel of 56-3 for a demonstration run, while Mario Andretti and Vince Granatelli drove the other two cars. Following this presentation in front of the packed grandstand, the groundbreaking Lotus was put on display at the Indianapolis Motor Speedway Hall of Fame Museum. Further acclaim was bestowed at the 2014 International Historic Motoring Awards, where the car was nominated for Car of the Year, and the 2014 Quail Motorsports Gathering in Carmel Valley, California, where it garnered Octane magazine's Editor's Choice Award.

Driven by the legendary Graham Hill (perhaps the only driver to have ever won the so-called Triple Crown of Motorsports—the Indianapolis 500, the 24 Hours of Le Mans, and the Monaco Grand Prix or Formula 1 Drivers' Championship), this remarkable Lotus would make a sensational addition to any collection. Its associations with Andy Granatelli, the self-proclaimed Mister 500, STP, and the dominant Team Lotus of the 1960s make it a historically significant and technically revolutionary car that can expect a warm welcome at vintage racing events and premium
concours d'elegance the world over.