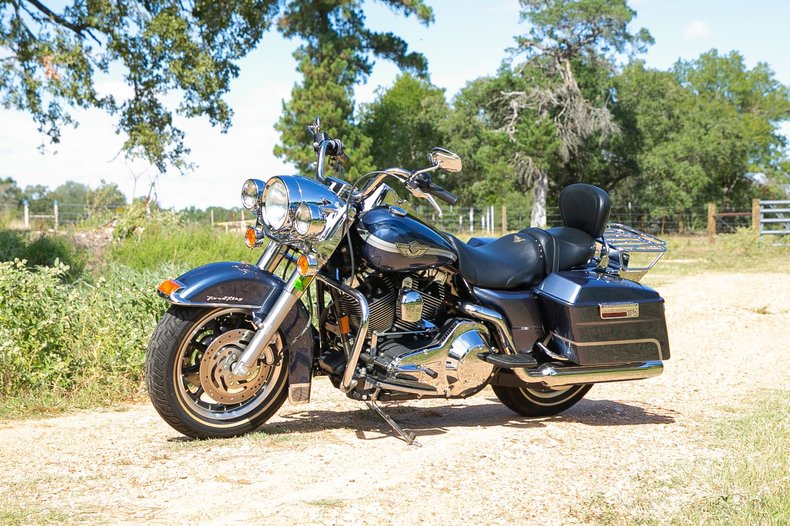 This 2003 Harley-Davidson Road King is part of a special edition released to celebrate the company's 100th anniversary and was purchased new by the seller, who has only put 6893 miles on it. The bike is finished in blue with silver and gold accents, and power is from an 88ci V-twin paired with a five-speed transmission. Additional features include a removable windshield and passenger backrest, electronic fuel injection, dual front disc brakes, cruise control. This FLHRI is offered with an owner's manual, two helmets and windshield with clean Oklahoma title.

The bike is finished in Gunmetal Pearl with silver stripes and gold pinstriping. Features include chrome engine and rear guards, spotlamps, hard locking saddlebags, a removable passenger backrest, and a detachable windshield, which added 100th Anniversary medallions on the fuel tank,

Nine-spoke 16″ wheels wear older Harley-Davidson Dunlop whitewall tires. The conventional fork features chrome cowbells, while the rear swingarm is mounted with dual air-adjustable shocks. Braking is from dual disc brakes up front and a single version in the rear.

The sole gauge mounted in the chrome center dash panel houses a 120-mph speedometer and a user-selectable digital display with an odometer that shows 6893 miles.

The air-cooled 88ci Twin Cam V-twin powers the rear wheel through an enclosed chain primary, a five-speed transmission, and a final drive belt. Features include electronic fuel injection, rubber mounting, and electronic cruise control. The engine is started and run every couple of weeks and is garage kept, following which fluid changes were carried out by a local shop.

The Bike is located in Austin Tx and fires up right away like a new bike. Please contact us for more info.