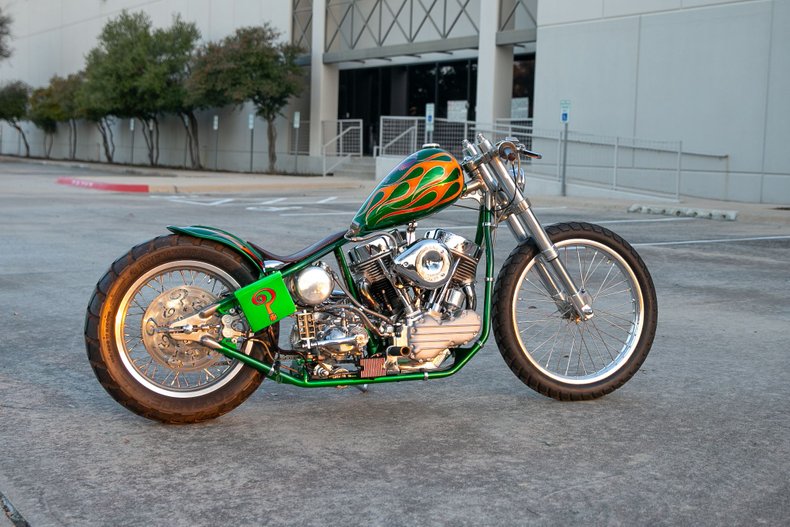 After Larry died in the Fall of 2004, longtime Indian Larry builders Paul Cox and Keino Sasaki kept working together in the original Brooklyn custom shop. So in 2005, when Michael Lichter invited Indian Larry's Motorcycles to build a brand new bike for an upcoming Speed Demons Exhibit in Sturgis—Paul and Keino accepted the challenge in a New York minute.

From day one, these two legendary New York builders set out to create a rideable work of art that was race influenced, unique unto itself—but still representing Indian Larry's vision, craftsmanship and legacy.

For starters, Paul and Keino built their own ultra narrow triple trees, just wide enough to fit the 21, but narrow enough to make the tight package they both liked to build. After that, they were looking for an alternative to their customary belt drives that had the mechanical look of an open chain primary, without the maintenance issues. They started with a stock double row sprocket and clutch basket and turned the teeth off so he had a set of universal centers to work with. They then acquired a pair of 50 series sprockets and opened up the centers and married the two to make a 530 chain primary. This was a nice resolution to the two concepts, in tight, but with an open, airy, mechanical look.

The only brake on “Tempting Fate” is a Performance Machine with an Indian Larry Legacy Question Cross rotor. Of course, Paul stitched up the horned leather saddle. The gas tank is a fat bob they axed in-house, and the rear fender, which they modified, is from Lucky's Choppers. The oil tank is one of Indian Larry Legacy's spun aluminum jobs. They then ran braided oil, fuel and brake lines throughout the bike. Paul says one of the pleasures in building this bike is getting back to building with extra parts from Indian Larry's custom shop, their private stash, modifying takeoffs from other bikes and letting all that inspire new ideas.

Finally, Paul and Keino had been talking to paint wizard Dave Perewitz for a while, about
collaborating on a project. For this unique build, they discussed some rough concepts on the logo and color at length, and then Perewitz ran with it—applying the House of Kolor Metallic Green, his trademark flames in orange with gold leaf, and violet pinstriping and lettering.

The finished work was nothing short of victorious. Indian Larry's vision, artistry and craftsmanship continues to live on in this electrifying custom motorcycle, “Tempting Fate”.