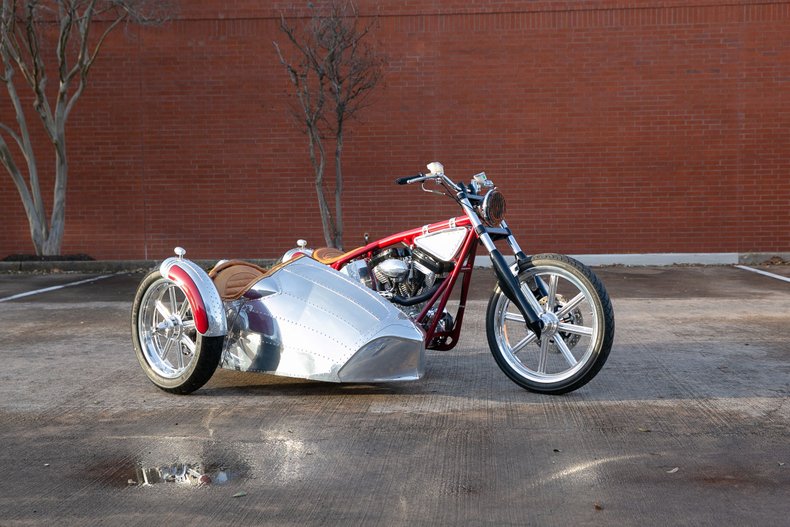 World-renowned motorcycle builder Jesse James unveiled this custom one-of-one “Airstreamer” Chopper and SideCar in May 2009 at the third annual Legend of the Motorcycle Concours, on the lawns of the ocean-side Ritz-Carlton in Half Moon Bay, California

The bike was built in exchange for two Airstream travel trailers for Jesse James and his wife at the time, Sandra Bullock, and ended up on display at the Airstream Headquarters in Ohio for several years.

Borrowing heavily from vintage Airstream designs like the Clipper and the Flying Cloud —James and his West Coast Choppers team first welded up a tube-frame chassis for the sidecar. Sheets of 3003 grade aluminum were then hand-formed over the tubing, held in place by hundreds of rivets, then mirror-finished just like Airstream's legendary travel trailers.

Moreover, a Dominator frame with a 32-degree rake and 200mm rear Metzeler anchors everything. The chassis is stuffed full of 113-cubic-inch S&S V-Twin power working through a Primo open belt primary and a Baker six-speed gearbox.

Brembo brakes all-round including the third wheel. By the way, that's not an itty-bitty gas tank hanging from the frame's backbone; instead it's a compartment that opens to display a pair of spark plugs and a wrench. Five gallons of petroleum is carried sprintcar-style in the sidehack's rounded flanks.

The finished work is one of the most elaborate masterpieces that West Coast Choppers has ever produced: a show-stopping aluminum-clad motorcycle and sidecar combo, with a trademark bare-metal peaked nose that suggests a Gurney Eagle F-l car or a Bell X-1B Supersonic Jet.

Note to buyer: this motorcycle was fully functional and running as of 2015, and has been sitting on display in a prominent car museum since then. This one-of-a-kind Jesse James “Airstreamer” Chopper and SideCar hasn't been started or ran in over 6 years, and is being sold as-is. The appropriate maintenance and preparations will need to performed before riding.