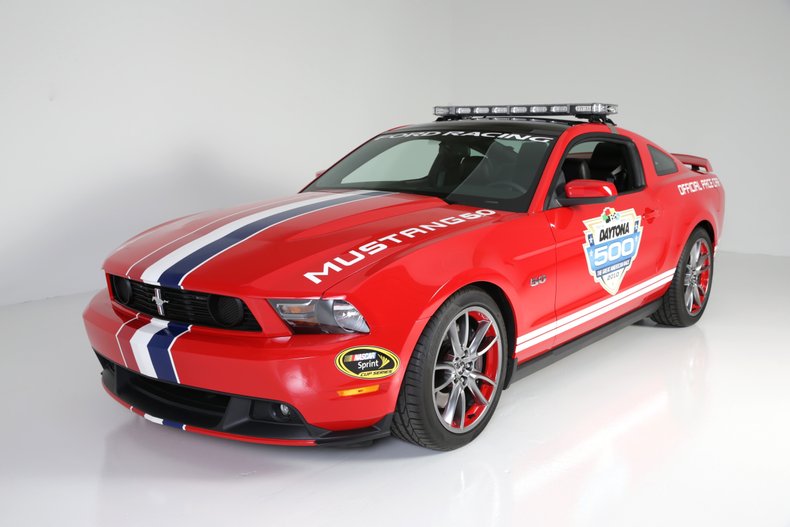 
For the first time in 40 years the Ford Motor Company was given the prestigious privilege of suppling the 2010 Daytona 500 pace car that would lead the Field of 43 racers to the green starting flag. Not only is the Daytona 500 the most watched race in NASCAR it has also been widely referred to as “The Great American Race.”

This One-0f-One Mustang GT model IS THE ACTUAL PACE CAR that Richard Petty drove at the Daytona 500 and this is the car Paced all laps and all caution flags on Feb ,14 2010. Its not often you have a opportunity to buy the actual pace car of the Daytona 500!!!


Beyond its bright Race Red paint, Custom stripes, Special Daytona 500 graphics, Panoramic glass roof, and the complete arsenal of caution racing lights that have been incorporated throughout the entire vehicle; This Mustang GT pace car presents ford's all-new high-tech 5.0 V-8 motor that generates 412 HP and 390 lb/ft of torque This car is great to drive with plenty of power but with only 786 miles on it you may want to keep it in the collection.

This one of a kind Ford Mustange holds a tremendous amount of history and racing heritage. It is one of only two fords since the start in 1959; and in fact the only mustang to ever be the official pace car for the most prestigious race in America- The Daytona 500.